There are two built in methods for analyzing a dot blot in ImageJ.

1. The first is to treat each row as a horizontal "lane" and use ImageJ's gel analysis function

2. The second is to subtract the background and measure the integrated density of each dot 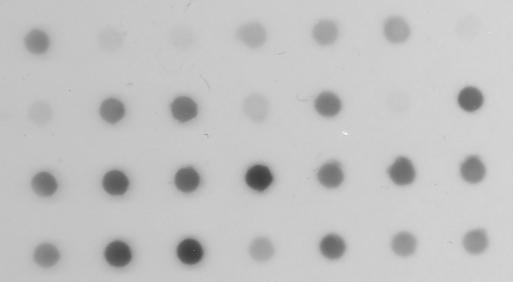 1. This is what you get when you treat each row in the dot blot as a horizontal "lane" and use the gel analysis procedure in the ImageJ manual

2. The numbers on each peak are the size of the corresponding dot as a percentage of the total size of all the dots. "Invert Peaks" in the Analyze/Gels/Gel Analyzer Options dialog was enabled to avoid having upside down peaks

3. In the second method, you measure the integrated density of each dot by outlining it and using the Analyze/Measure command. This method usually requires background correction of the image, which can be done using the Process/Subtract Background command

4. After correcting the background, enable "Integrated Density" in Analyze/Set Measurements, create a circular selection, drag it over the first dot, press "m" (Analyze/Measure), then repeat for the other 27 dots. Notice how the image now has a black background? It was inverted (Edit/Invert) so background pixel values are near zero, which is required for correct calculation of integrated density. You can invert the lookup table (Image/Lookup Tables/Invert LUT) to restore the original appearance of the image. The "Use Inverting Lookup Table" option in Edit/Options/Image will invert the pixel data and invert the lookup table

5. The first column in this spreadsheet contains the integrated densities (as a percentage of the total) of the 28 dots measured using the gel analysis procedure

The second contains the results obtained by doing background correction using Process/Subtract Background, selecting"Integrated Density" in Analyze/Set Measurements, and then measuring each of the 28 dots using a circular selection 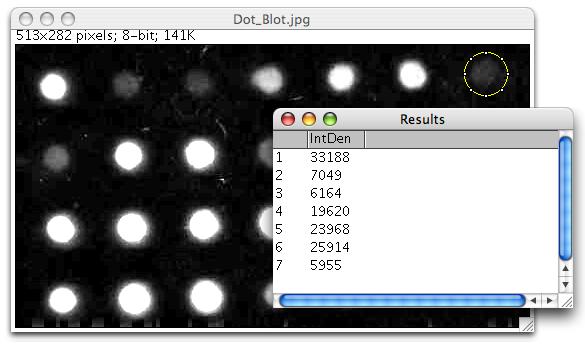