This guide has been produced to provide research guidance for students participating in the Ohio Innocence Project.

Ohio Constitution Via the Web

Where Codes Are Published

Publication of state codes will vary. The Law Library's state codes are located on the 4th floor with the other state materials at call numbers KFA through KFZ. Note that most of the print codes are no longer being updated.

There are several useful statutory finding tools that you can use when researching statutes.  These tools can save you time and money.  Some of them may be familiar to you such as indexes and table of contents.  Others may be new to you such as the popular names table.

Finding a Code by Citation

Retrieving  a statute by legal citation is the easiest and fastest way to get the specific case to which the citation refers.

To find this statute online:

A word about retrieving state statutes by citation online:

Finding a Statute by Popular Name

Sometimes a statute will have an official or popular name.  If there is a well-known name for the law you are interested in, consult the "Popular Names Table" in one of the code versions. This will provide you with the public law number and the Statutes at Large citation for the original act, as well as providing references to where the act has been codified.

An example of a popular name is the "USA PATRIOT Act."  The official name is "Uniting and Strengthening America by Providing Appropriate Tools Required to Intercept and Obstruct Terrorism Act of 2001."  Quite a mouthful!   Another example of an act with a name is the Americans with Disabilities Act.  You can see in the image below that when you look at the Popular Name Table, the Americans with Disabilities Act of 1990 has been codified at 42 U.S.C. § 12101 and following. 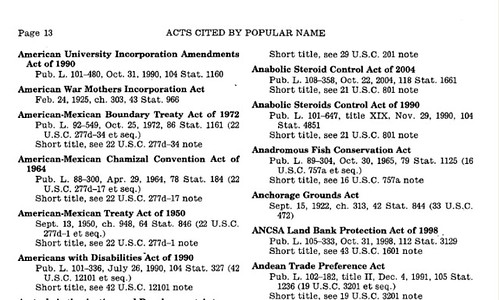 Where to Find the Popular Names Table

The "Popular Names Table" may be a separate volume or be a section within the last volume of the general index.

All print codes and some online codes will contain separate subject indexes.  An index is a great finding tool.  Topics are listed alphabetically and will refer you to the codified statutory sections pertaining to that topic.

Each code includes volumes that contain tables for parallel references. Locate the session law citation or public law number you are interested in on the table, and it will provide you with the title and section numbers where the statute has been codified. Please note that Lexis, Westlaw, and Bloomberg Law are only available to law students and law faculty.

Available to Law Students only (see a reference librarian if you do not have a CALI activation code).