Overview of the UN Structure 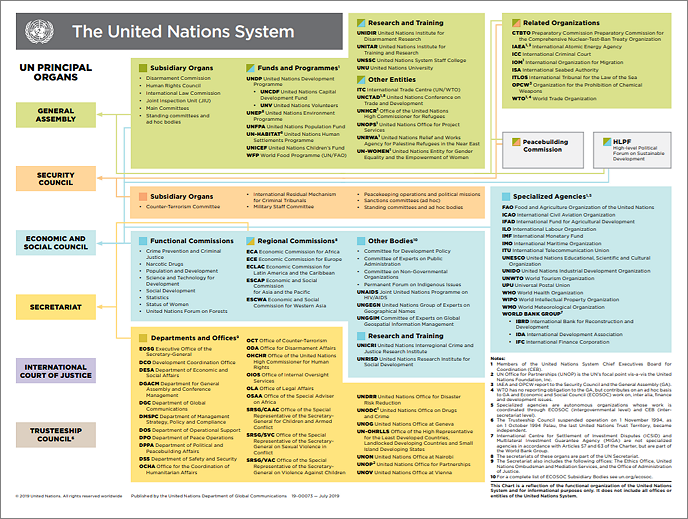 The United Nations is a complex organization. It is comprised of main organs, specialized agencies, programmes and funds, research and training institutes, and a variety of related bodies. The main organs of the UN are the General Assembly, the Security Council, the Economic and Social Council, the Trusteeship Council, the International Court of Justice, and the UN Secretariat. Clicking on the image of the chart above will bring you to a full screen PDF.

The UN supports an enormous network of interconnected web sites. The main organs of the UN with links to their website are the following:

The UN Regional Economic Commissions are responsible for coordinating economic and social activities in their respective regions. They report to the Economic & Social Council but operate with a great deal of autonomy.

Funds, Programmes, Specialized Agencies and Others

Help on Researching the UN

The Dag Hammersjold Library at the UN Headquarters in NY provides research and information to support the work of United Nations Member States. As an integral part of the UN Organization, the Library also aids in the dissemination of UN information to a wider public audience through online services, and a global depository library network. As part of this mission, it provides training materials to ensure researchers can make effective use of UN documentation.