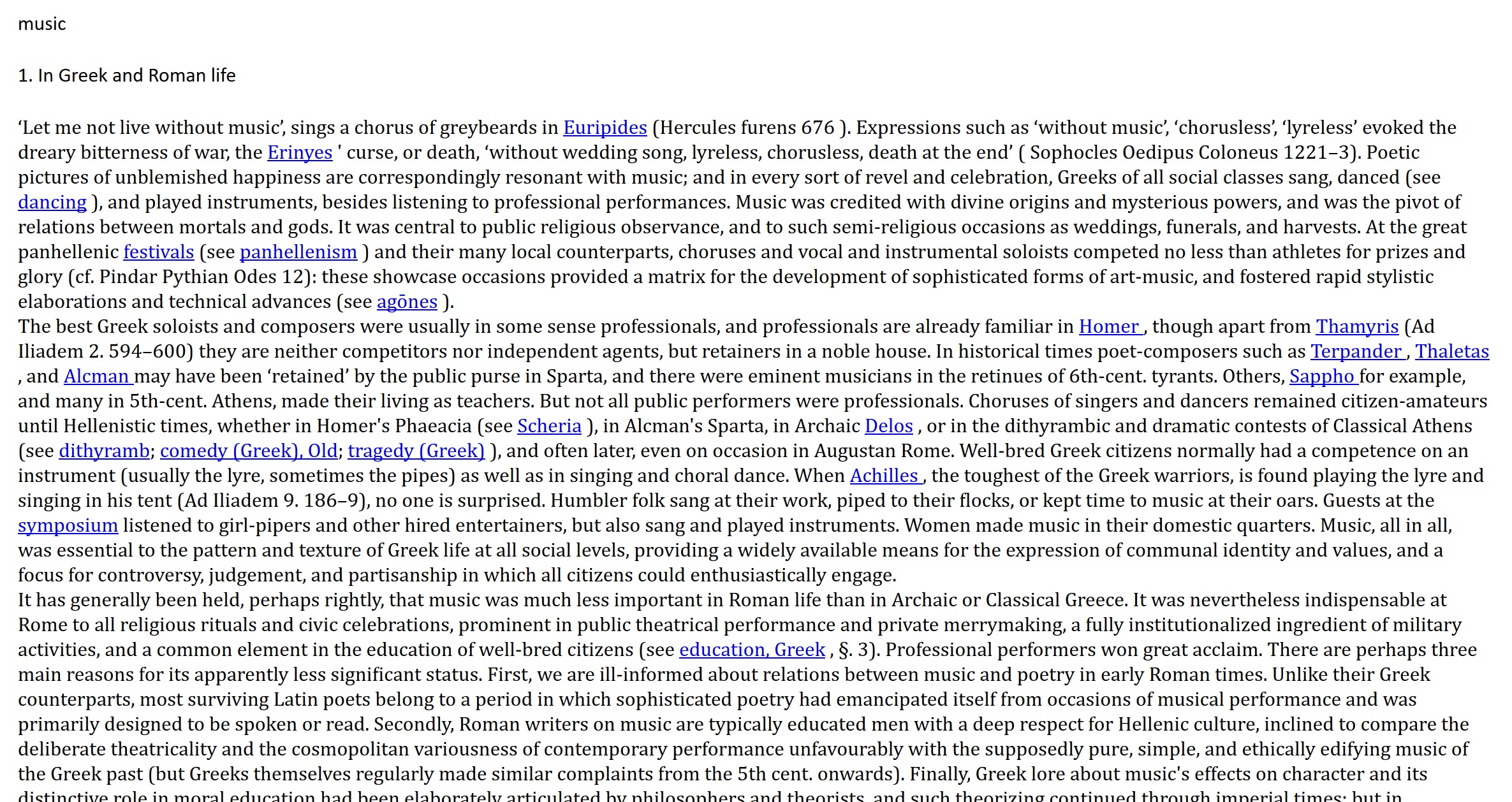 You can also begin with a broader background survey such as one found in an encyclopedia. If, for example, you look up the word "music" in the Oxford Classical Dictionary, 4th ed. (Class Ref.  DE5 .O9 2012 and online version [see below]), the entry on Greek and Roman music, including a reference to Aristotle's thesis on music in Politics 1339a-1342b, is followed by a brief bibliography of many significant modern and ancient sources. These sources, in turn, contain bibliographies, etc. You can also begin by checking out the footnotes and bibliography of a recent book on the topic, maybe one your professor recommends. Citations leading to additional citations is often referred to as doing research using "the footnote method."

Needless to say, whenever you use a text for reference, to paraphrase or quote, you must give credit to the author(s) by using in-text citations and/or footnotes. Your bibliography at the end of your paper must list the full citation(s). See also "Citation Styles," the last section in this tutorial.

To view and listen to video-recorded step-by-step Searches in the OCD and the OBO, click on the right-pointing arrow in the image below.

Strengths: Offers an introduction to the subject and brings you up to date on the basic discussions. A reference source such as the OCD often gives you a brief, but useful basic bibliography.

Note: The 2nd (1970) edition of the OCD can also be consulted in this case since it provides more of a music theoretical background. On the other hand, the more recent 4th and 5th editions brings you up to date as far as the bibliography is concerned and includes new discoveries of musical notations that have been found and published since the 1970 edition.

Limitations: The bibliography and descriptions are brief and intentionally basic. Also, you still need to consult the Library Catalog for the existence and location of the books listed.

Another bibliographic resource to consult is the Oxford Bibliographies Online.﻿

They offer annotated lists of primary and secondary literature, including editions, translations, and commentaries.

A search on Aristotle retrieves a number of categories, including "Aristotle's Politics," and recommended introductions and overviews, but also Greek text editions such as, Dreizehnter, Alois. Aristoteles' Politik. Munich: Wilhelm Fink; and Ross, William D. 1957. Aristotelis Politica. Oxford: Clarendon (within the Oxford Classical Text series), editions of English translation and commentary, as well as philological and analytical commentaries, collections of articles, lexica, bibliographies, and focused research, including a section on "Education and Music in the Best Regime."

In that section, note the informative polemic concerning the importance of music and tragedy in the Politics vs. the Poetics between Lord [Lord, Carnes. 1982. Education and Culture in the Political Thought of Aristotle. Ithaca, NY: Cornell University Press] and Ford [Ford, Andrew. 2004. Catharsis: The Power of Music in Aristotle's Politics. In Music and the Muses: The Culture of “Mousikê” in the Classical Athenian City. Edited by Penelope Murray and Peter Wilson, 309–336. New York: Oxford University Press].