Another approach is to consult an index which incorporates journal articles and essays in addition to monographs. In Classics, the main index is L'Année Philologique (Class Ref. Z7016.M35 A). Note: There is a publication lag of three years for the print volumes.

You can also search the online edition of L'Année Philologique for more recent issues:

The print volumes of L'Année Philologique contain a list of the journals indexed along with their abbreviations. This index should be consulted for the authoritative manner in which to abbreviate ancient studies journals in references and footnotes. The citations only list abbreviations, so you need to consult the key in the beginning of each volume for the full title of the item. After the list of journals follow citations listed by ancient authors (new editions by and works about) in alphabetical order followed by a list of subjects such as Literature, Linguistics, Archaeology, History, etc.

Note: The ancient authors are listed under the Latin form of their names, e.g., Aristoteles (Stagirites) instead of Aristotle, Liuius instead of Livy, Iustinianus instead of Justinian. This is important to keep in mind when searching "Ancient Authors and Texts" in the online version.

To view and listen to a video-recorded step-by-step Search in l'Année Philologique click on the right-pointing arrow in the image below.

Limitations: The time lag of the print editions means that you might miss a number of more recent publications. You will still need to consult the Library Catalog to determine the existence and location of the item. The Année provides only a citation. The online Année provides abstracts of articles, and the full text if the publication is one to which UC subscribes or one to which there is free, open access.

L'Année Philologique began in 1924. Before the Année there were other bibliographies/indices that listed works produced in Classics: Marouzeau's Dix Années (1914-1924); Lambrino (1896-1914); Klussmann (1878-1896); Engelmann(-Preuss) (1700-1878); Schweiger (-1820); Fabricius (- through the 1700s) (for their full bibliographic information, see the Subject Guide [forthcoming] under “Bibliographies”.  All of these bibliographies, except for Fabricius’ Bibliotheca Graeca (in the Rare Book and Manuscript Room) and Bibliotheca Latina (on microfilm) are located in Reference. 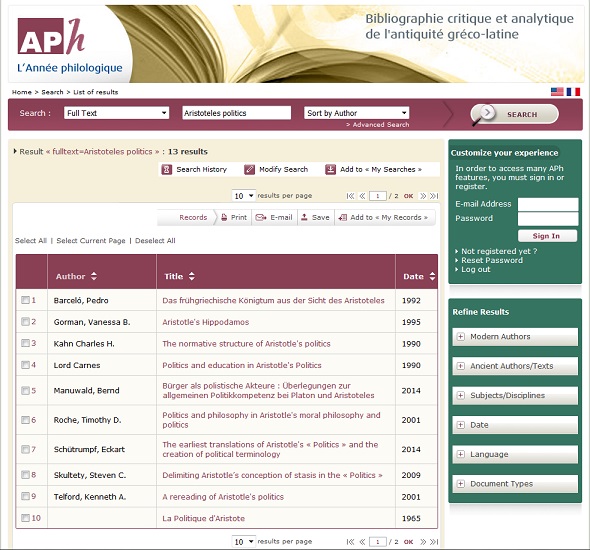 Examples of citations found in L'Année on Aristotle and his Politics:

The 1999 print issue lists other editions:

The 2016 online volume of L'Année Philologique lists a 2016 edition of Politics with commentary to books 1, 3, 7, 8 by Christian Mueller-Goldingen:

Note: Unlike in the Sciences, in the Humanities “the most recent” does not necessarily imply the most important, the best edition or a superior work.