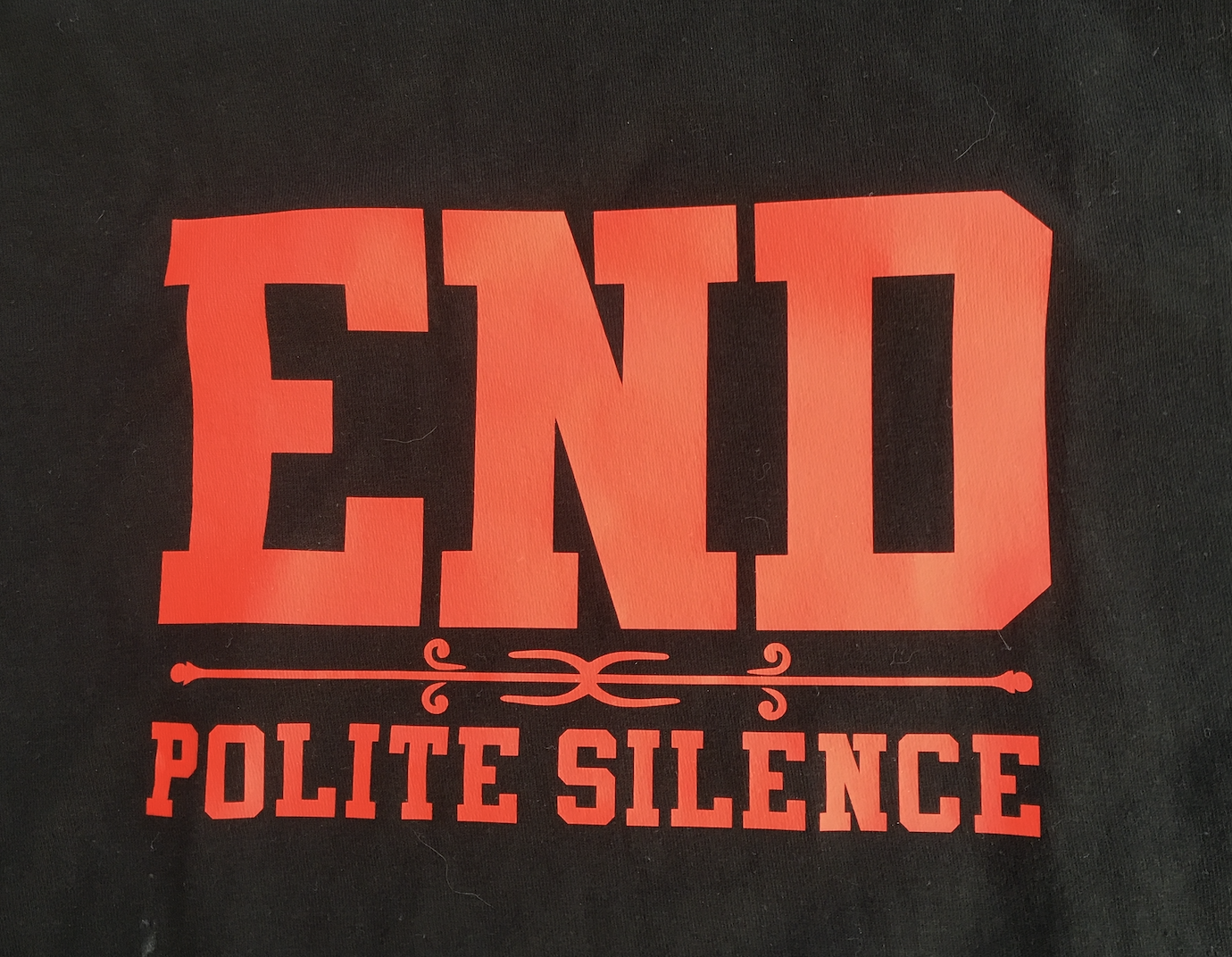 End Polite Silence™  is a trademark slogan created by Carol Tonge Mack, an educator, Black feminist, student advocate, and Assistant Dean in the College of Arts and Sciences at the University of Cincinnati. The Coalition founders were inspired by Dean Mack’s message and obtained permission to use the End Polite Silence™  slogan as their source of inspiration. Coalition members wear their End Polite Silence t-shirts Fridays to draw attention to the movement. Visit erasingtheisms.org to purchase a shirt and learn more about Dean Mack’s work.

UC’s Coalition for Anti-Racist Action (CARA) is a cross-campus network of staff and faculty committed to dismantling white supremacy by doing work to support calls to action by Black-led organizations at the University of Cincinnati.

As individuals committed to dismantling white supremacy, we learn from existing resources how to combat systemic racism, explore complicity, become better allies, and help others do the same. Further, we work collaboratively with Black-led organizations to illuminate and challenge policies and practices that exclude, harm, or otherwise hinder the success of Black students, alumni, staff, faculty, and community partners. We write letters, speak at meetings and events, participate in demonstrations, and otherwise advocate policies and practices that support calls to action by Black-led organizations at the University of Cincinnati.

Since November 2020, the Coalition has been led by Megan Lamkin with co-Chair Trent Pinto. The Co-chairs are advised by a cabinet comprised of five consultants from the Black staff and faculty; two Coalition Secretaries; and Co-Chairs of each Standing Committee. Standing committees include:

Coalition co-chairs, consultants, secretaries, and committee chairs serve 2-year terms up to four years. Staff and faculty who sign the Pledge to Organize for Racial Equity at UC are invited to become members. Members are encouraged but not obligated to engage in committee work.

CARA: how to get involved

How to Get Involved

Pledge to Organize for Racial Equity at the University of Cincinnati

Pledge to Organize for Racial Equity at UC.

This pledge is an update to the 2020 Pledge to Dismantle White Supremacy Within Ourselves and Our Institutions signed by 173 UC employees, many of whom joined UC’s Coalition for Anti-Racist Action, a group developed by early pledge signers. The original pledge emphasized the need to confront internalized racist ideas as a first step toward institutional change. It was inspired by Layla F. Saad’s (2020) Me and White Supremacy: Combat Racism, Change the World and Become a Good Ancestor and helped guide the Coalition’s work during their inaugural year. The current version reflects a desire within membership to direct more attention toward identifying and challenging racist policies and practices as a next step toward institutional change. It was inspired by Black scholars and activists at UC and informed by Ibram X. Kendi’s book, How to Be an Antiracist (2019). It intends to complement the first pledge, not to replace it.

The University of Cincinnati (UC) is a predominantly white institution with a long history of accommodating anti-Black racism. UC’s Irate8, an award-winning student activist group, provides a brief overview of the most egregious (documented) examples in their “Let Us Help You See” video (YouTube, 2015). From Charles McMicken’s 1861 bequeathment to found a college for “white boys and girls” to the Martin Luther King trash parties in the 1980s; the UC Police killings of Lorenzo Collins (1997), Kelly Brinson (2010), and Everette Howard (2011); the racist cartoons with no accountability (2013); and finally the UC Police murder of Samuel DuBose (2015) that ignited their organizing efforts, the Irate8 compiled important history to help “you see” racial injustice at UC and mobilize for change. While the Irate8 achieved important milestones (increased funding and resources for minority serving programs, the inclusion of a DEI statement for all UC job applicants, and more), their organization dissolved as its leaders graduated.

As the late 2010s neared the 2020s, cell phone recordings of police killing unarmed Black Americans continued to elevate awareness of anti-Black police brutality in the United States. Each tragedy ignited local and regional protests, demonstrations, and organizing efforts. The May 2020 murder of George Floyd was the last straw: it ignited protests, demonstrations, and organizing efforts across the nation and world. At the University of Cincinnati, the Black Round Table, Undergraduate Student Government, and others produced fresh sets of demands to UC’s president. Staff and faculty organizations produced resolutions and statements of their own, calling for action and committing to do better.

Among the statements produced was a Pledge to Dismantle White Supremacy within Ourselves and Our Institutions for UC staff and faculty. Those who signed the pledge had the option of joining what would eventually become UC’s Coalition for Anti-Racist Action (CARA), “a cross-campus network of staff and faculty committed to dismantling white supremacy by doing work to support calls to action by Black-led organizations at the University of Cincinnati”. Whereas Black students, staff, and faculty have been organizing and leading efforts to address racial inequities at UC since the 1930s, the forming of the Coalition marked the first time (to our knowledge) that members of the dominant majority have formally organized to support calls to action by Black-led organizations at UC.

Coalition work during that first year emphasized defining organizational structure and initiatives, listening, learning, facilitating discussions, building collaborations within the institution, and writing letters and statements. As the Coalition enters its second year, it hopes to engage more directly in enacting policy change.  Although their efforts emphasize collaborating with Black-led organizations at UC, they aim to work collaboratively with all organizations working to produce racial equity.

This work is made possible by scholars and activists at UC who have produced and shared knowledge, understanding of human experience, and models for advocacy and organizing for racial justice. Content (including definitions) is informed by How to Be an Antiracist (Kendi, 2019).

Signers are provided the option of joining UC’s Coalition for Anti-Racist Action (CARA) as a “Member” or "Friend".

Members will be identified as CARA members on a public-facing web page. Members also engage in anti-racist action through CARA or through another organization at UC.

Friends are added to our group in MS Teams (provides access to files) and provided email updates and notifications. Those who join CARA as friends now may become members when they are ready.

We strongly encourage returning and new CARA affiliates to sign as members rather than friends. While we understand that some people may be in the early stages of their advocacy journey, change cannot be made until we all stand up together. Anonymity does a disservice to those who do not have the privilege of choosing whether or not to be seen.

I, the undersigned employee at the University of Cincinnati (UC), recognize that ongoing race-based disparities in health, wealth, and wellness are a consequence of racial inequity, i.e., that some racial groups have more access than others to resources that support those outcomes. I reject the notion that race-based disparities are the result of biological, cultural, or behavioral superiority or inferiority between races.

I also understand that racial inequities are created by racist policies. I define a racist policy as “any measure that produces or sustains racial inequity between racial groups.” “Measures” at UC include written and unwritten rules and guidelines that govern institutional operations.

My awareness of the link between racist policies and race-based disparities compels me to do the work necessary to create measures that generate racial equity.

1.Use existing resources to learn more about systemic racism and explore my complicity. I will especially seek content produced by Black, Indigenous, and other People of Color to support my learning.

2.Facilitate learning in others when I have capacity to do so.

3.Develop knowledge and skills to speak with others about racial inequity at UC.

4.Support measures that generate racial equity (i.e., antiracist policies) and express ideas that reinforce that no one racial group is biologically, culturally, or behaviorally superior to any other (i.e., antiracist ideas).

6.Work within an organized group that helps me engage in pledge items #1-5 above and collaboratively produce racial equity at UC.

7.Value, acknowledge, and cite Black scholars and activists who have provided the knowledge, understanding of human experience, and framework for doing the work needed to create racial equity.

8.Please identify forms of action/learning you will take that are not listed above.